Following on from the engine repair/rebuild of my Suntom 186F diesel engine, which is a copy of the Yanmar L100, I decided to fit a low oil pressure warning switch and warning light circuit, since I'm now a little bit paranoid about the engine! Especially since they will run without much complaint right up to the very end, when they suddenly fail to start and run again!

Looking at the Yanmar L100 Illustrated Parts catalogue some time ago, I noticed that a low oil pressure switch pt. no. 183150-39450 was an optional extra fit to Yanmar engines. It seemed a good idea to me to fit one, so I did a little bit of hunting around. The cheapest equivalent type switch was from Direct Equipment spares, so I got one.

How does it all work? The pressure switch electrical contact is normally made with no oil pressure, so it applies an earth via the switch body, engine and frame to the earth terminal of a suitable warning lamp holder. If a power supply is available on the positive side (centre contact) of the lamp holder, with a lamp fitted, it will light up! When normal engine oil pressure is applied to the internal switch, it opens the contact, and breaks the earth line to the lamp, so the lamp goes out, and it indicates that the engine has sufficient oil and oil pressure. All nice and simple stuff!! That's what I like.

To fit the low oil pressure switch, it's best to have the primary chaincase removed for access, which is a bit involved, but since it was off for the engine repair, I had ideal access.

Next to the triangular oil pump plate on the crank case, there's a threaded hex slotted blanking plug, which can be removed after the engine oil is drained out first! I tested the oil pressure switch first electrically, before fitting, with a multimeter. It should be continuity (short circuit) from the connector tab to the body, with no pressure applied. In my case, it's a good 'un, so it's ready to fit. 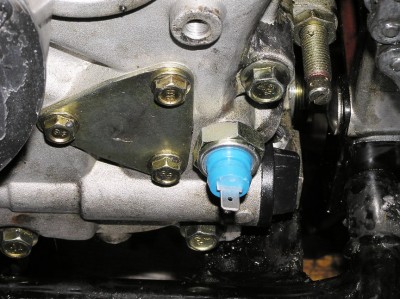 Now the oil pressure switch can be fitted, and it's a tight screw fit flush into the crank case. To help prevent oil leaks, I put a small smear of Loctite gasket sealant on the threads, allowing for enough metal to metal contact for the pressure switch!

Hi thanx for the information, but much space is left for the inner primary chain case part

There's enough space behind the primary chain case for a standard Royal Enfield conversion, to fit the low oil pressure switch. I checked it out first, and it just fits!!
There's nothing like the smell of burnt vegetable oil in the morning!!

Back again to the "electrickery" workshop!

This wiring information is for Royal Enfield installations, though it could be similar for other motorbikes....
On the Enfield, there is quite often a spare Neutral gear light indicator on the speedo, which can be used for oil pressure purposes. The spare lamp holder and wiring was there in my case, just not connected to anything.

Time for a bit of electrical "Knitting"! Luckily I had a bit of spare car wire left over for a long time, wound on a small cable drum. It was even a similar colour to the pressure switch body, which is rather handy.
The cable is first routed approximately where is has to go, plus 2 to 3 inches spare length, just in case! I put some black heat shrink protective sleeving over the cable in vulnerable places, where it might rub against metal things. Heat shrink sleeving is very useful stuff for cables, and can be bought from electrical spares places such as Maplin, or bought in boxed kits from some hard ware stores, or maybe even on eBay. Now to do a bit of car connector crimping. After stripping the 18 awg cable end, I used a ratchet operating type connector crimping tool. These give the best results, and a bit better than a large pair of pliers! I always also solder the cable ends to the car connector/metal crimp, as this provides the most reliable electrical connection, which lasts a very long time!
It's a tight fit onto the pressure switch terminal which is good, and I bend the tab up a bit, so the cable will run clear of the back of the chain case when refitted.
I used a cable run with the throttle cable up to the frame and the main wiring loom. A bit more "knitting", routing the cable to behind the headlight assembly. I always try to feed the new cable with the main cable loom where possible, and through the existing insulating tape wrapping - It saves using extra electrical insulating tape! I've got the basic cable run done, so it can be strapped up in places with a few plastic cable ties.
And do a bit of heat shrinking with the heat gun.... Routing around time behind the headlamp assembly, with the headlamp removed, I found the spare neutral light lamp holder and its associated wiring.
I did some soldering and crimping to the +'ve central contact wire of the lamp holder, which is brown coloured! I added a length of some spare red cable via an in- line car 'bullet contact" connector, to connect to a suitable DC supply. The lamp holder earth contact in this case is red, just to confuse matters! With a multimeter set to DC volts, I hunted around for a suitable switched voltage supply from the ignition switch. Red wires are usually a good guess with ignition wires?! I was lucky that it didn't take long to find, so I could pull apart the in-line spade connector, and solder my new red wire from the spare lamp holder, to the ignition switched side of the existing spade connector. I always make sure that the metal connector is clean first, and don't forget to slide over a bit of protective heat shrink over the stripped wire end, before soldering up; using a good quality fluxed solder and a reasonable wattage soldering iron. I sometimes use a small portable gas solderer, and they work quite well. 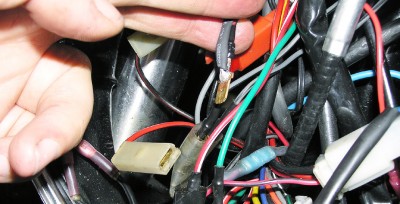 I can now put the connectors back together, and tidy everything up a bit, strap the cables up in the headlamp area to reduce the "spaghetti effect" a little bit, when you're doing wiring work!! The occasional bit of electrical insulating tape comes in handy for the lamp holder cable connections....

I found a suitable 4 watt 'p' bulb bayonet type to fit in the lamp holder, and with the ignition switch on, it all works! Now to tidy up the whole cable installation, cut the new plastic cable tie ends off neatly, and check for correct cable routing when running next to metal parts.
Last edited by old clunker on Sun Sep 16, 2012 10:33 am, edited 2 times in total.
There's nothing like the smell of burnt vegetable oil in the morning!!

Now the lamp holder with bulb can be carefully fitted in the very tight space! and the headlamp put back.

As the low oil pressure switch connection is in a potentially damp and dirty high vibration place, I sealed up the connection with some B&Q mutli purpose sealant - you could even paint over it should you wish, after it has fully cured!It's a very versatile sealant.
So this stuff will keep the electrical connector securely in place. 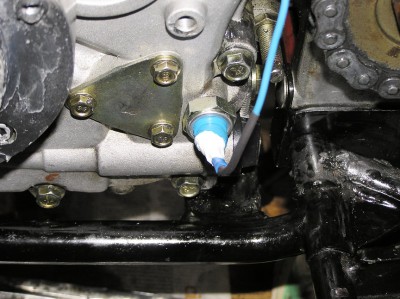 So that's it. The spare green coloured indicator lens inside the speedo, isn't ideal as a warning colour, but for my purposes, it acts as a useful no-go warning indicator light, if it comes on when the engine is running. If it comes on, it's time to shut the engine down fast - before it does it destructively itself!

It's also acts a good reminder to turn the ignition switch off, save the battery, and take the ignition key out when the engine isn't running!

I hope that this has provided some useful information about how to successfully do electrical work on motorbikes and make reliable long lasting electrical contacts/connectors.
There's nothing like the smell of burnt vegetable oil in the morning!!

Thanx for the detailed description of the oil switch installation. A nice safety warning option